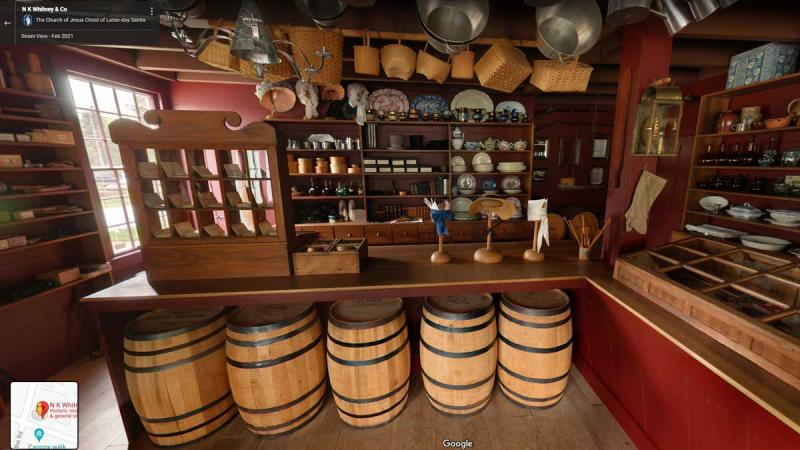 Google Street View of the interior of the Newel K. Whitney Store.

In 2020, Book of Mormon Central (BMC) and the Church began preparing 360-degree tours of major Church History sites. BMC gathered 360 spheres from the Church History Department, the BYU Religion Department, third party groups and individuals, and our own footage. We commissioned a contractor to film footage at the Priesthood Restoration site in Harmony (now Oakland) Pennsylvania. In April and May 2021, BMC sent video teams to capture 360 footage from sites in Nauvoo and Kirtland that we needed to fill in some gaps. We worked with the Church’s Intellectual Property Office to get permission to put the Church’s name on our work.  After all this effort, there are now 38 major Church History sites with 360 tours of grounds and structures available in Google Maps Street View. Book of Mormon Central gathered the spheres, edited them, prepared them to meet Google requirements, and uploaded them to Google Maps Street View with the Church’s name and logo. We linked to these spheres in our ScripturePlus mobile app. The Church linked to them in the Gospel Library App and the online Come Follow me enrichment material. The 360 tours have now been viewed over 10 million times and we have received a great deal of positive feedback from people all over the world, some of whom will likely never personally visit places like Joseph Smith’s Red Brick Store in their lifetime. A 360 tour where a person can move the image around, see the floor and ceiling, go upstairs, follow a path through the woods, etc. is a very engaging digital way to visually appreciate a landscape or a structure.

Here is an example. Go to Google Maps and navigate to Kirtland, Ohio.

Then zoom in and click on the Newell K. Whitney Store.

Within the content box that appears in the left-hand portion of the screen, scroll down to see the Photos.

The thumbnail images on the left-hand side of the screen with the circular arrow in the lower left-hand corner are 360 spheres. The first of these spheres displays in the right-hand portion of the screen. This is the 360 image a user can navigate around with their finger or their mouse. Notice the Church’s logo and name on the image. BMC curated this sphere and posted it on Google, but it is official Church content. Also notice the navigation widget in the lower right-hand corner that allows a user to move between the first and second floors of the Newell K. Whitney Store.

More than 220 such spheres are now up on Google at 38 different Church History sites, and they have been viewed more than 10 million times during the 2021 Doctrine and Covenants year. This has been a brilliant collaboration between the Church and BMC as a trusted independent organization.

In addition, we have created 3D models of the Kirtland Temple, Independence Temple (architected, but never built), Liberty Jail, Joseph’s Red Brick Store, and the Nauvoo Temple. We are in the process of uploading these to Google Maps Street View. Here is the spectacular 3D model of the interior of the Kirtland Temple. 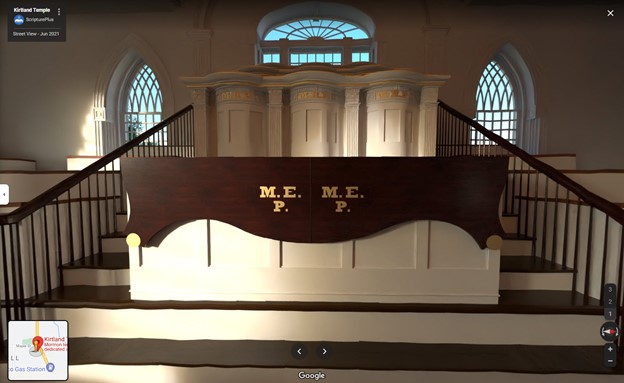 Based on significant historical research, this is the best rendition currently available of what the Kirtland Temple looked like during the Pentecostal events of 1836. The realism is near-photographic quality. A user can move between the 3 floors in the structure, go upstairs and downstairs, move around each room, etc. Note that this model is not official Church content and has not passed correlation. We posted it in the name of ScripturePlus as you can see in the upper left-hand corner.

Over time, BMC will bring more and more 360 and 3D content online to allow students of the scriptures to more accurately visualize the context of passages in the Standard Works.