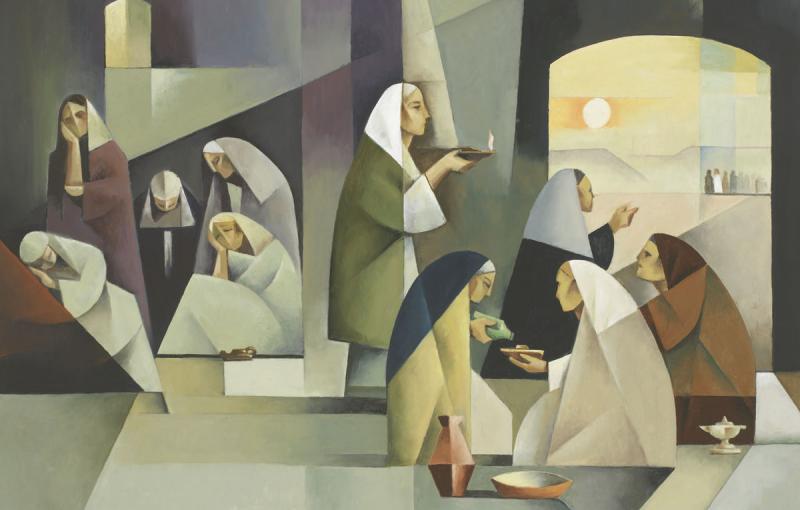 The Parable of the Ten Virgins by Jorge Cocco

The Parable of the Ten Virgins stands as a reminder to Christ’s covenant people that He will come again at any time, and so each must watch and prepare for whenever that day arrives.

Just days before His mortal ministry would end with His ultimate sacrifice, Jesus saw the wickedness and ignorance of so many in Jerusalem who, despite spending their lives looking for a messiah, did not recognize or accept Him.

Turning to His small band of disciples, not wanting them to perish in unbelief once He was gone, Jesus taught of the signs, catastrophes, and destruction that will herald His Second Coming. And He warned of what lay in store for those who neglected to prepare for that great and terrible day.

The disciples, naturally anxious to face such difficulty, asked when these things would happen and when Jesus would come again in glory to save them.

To help them understand more clearly what would be asked of them, Jesus gave this parable:

Then shall the kingdom of heaven be likened unto ten virgins, which took their lamps, and went forth to meet the bridegroom. And five of them were wise, and five were foolish.

They that were foolish took their lamps and took no oil with them. But the wise took oil in their vessels with their lamps. While the bridegroom tarried, they all slumbered and slept.

And at midnight, there was a cry made, “Behold, the bridegroom cometh; go ye out to meet him.” Then all those virgins arose and trimmed their lamps. And the foolish said unto the wise, “give us of your oil; for our lamps are gone out.” But the wise answered, saying, “not so, lest there be not enough for us and you: but go ye rather to them that sell, and buy for yourselves.”

And while they went to buy, the bridegroom came and they that were ready went in with him to the marriage: and the door was shut.

Afterward, came also the other virgins, saying, “Lord, Lord, open to us.” But he answered and said, “Verily I say unto you, I know you not.”

Then Jesus ended His parable by saying, “Watch therefore, for ye know neither the day nor the hour wherein the Son of man cometh.”

By this point, Jesus had told his disciples over and over that no one, not even the angels, knew the day God the Father planned to send His Son again to end this earthly time of trial.

In this parable, the Savior taught that being personally prepared is a key doctrine on the path toward eternal life.

God wants everyone in every generation to grow in faith by preparing for that final day. Each person must spiritually gather, for themselves, an adequate supply, sufficient to meet the challenges and opportunities handed to them in this life.

In Jesus’ warning that no one knows the day nor hour of His return, many see counsel that it could be at any moment, so make haste. And though it is wise to act as if each day could be the last, the Parable of the Ten Virgins warns of the follies that can happen when that last day is much farther off than we expect.

In this Parable, the Bridegroom was late in his arrival. So late that all Ten Bridesmaids fell asleep as they waited. There is real spiritual danger in the complacency and carelessness that can be found in waiting much longer than anticipated.

Christ will likely be longer in coming than most people will want or expect, and some will grow weary in waiting and will, ultimately, be caught unprepared.

Though all Ten Women fell asleep, we see guidance in the vessels carrying the extra olive oil brought by the Five Wise Bridesmaids.

The olive oil in their lamps may convey many meanings, but one stands out in the light of spiritual preparation. In both scripture and early Christian tradition, olive oil is symbolic of the Holy Ghost. This is because the Holy Ghost provides spiritual nourishment, enlightenment, and comfort just as olive oil in the ancient Near East was used for food, light, and anointing.

Gaining the companionship of the Holy Ghost is the most important thing we can do as we make our way in this life. The Holy Ghost, like oil in lamps, provides light along the path so that we may avoid pitfalls and obstacles along the way.

In modern revelation, the Lord referred to the Parable of the Ten Virgins as He spoke about the day when He will come in His glory, assuring that those who “are wise and have received the truth, and have taken the Holy Spirit for their guide, and have not been deceived . . . shall abide [that] day.” (D&C 45:57

Many people wonder why the Prepared Five could not share a little of their oil with those who found themselves on empty. For one thing, Jesus said that the Bridegroom tarried and didn’t arrive until very late. In Jesus’s time, people carried small clay lamps that normally had a wick that would burn olive oil for about an hour. Even the wise probably didn’t have much olive oil left themselves. As they said, there is “not enough for us and you” (Matthew 25:9). It was midnight, and the wedding party was just getting started and they had likely been waiting hours.

As President Spencer W. Kimball explained: “In the parable, oil [could] be purchased at the market,” although doing so took too much time. In real life, that last-minute mad dash to church doesn’t work. “In our lives the oil of preparedness is accumulated drop by drop in righteous living. Attendance at sacrament meetings adds oil to our lamps, drop by drop over the years. Fasting, family prayer, home teaching, control of bodily appetites, preaching the gospel, studying the scriptures—each act of dedication and obedience is a drop added to our store. Deeds of kindness, payment of offerings and tithes, chaste thoughts and actions, marriage in the covenant for eternity—these, too, contribute importantly to the oil with which we can at midnight refuel our exhausted lamps.”

Noting the audience of this parable helps us to see the extra warning. So many times before, Jesus compared the believers with the unbelievers. But in this parable, He spoke to his disciples, those who knew and loved Him, those who believed that they would stand with Him until the end. In Ancient Israel, numbers carried deep meaning, and the number ten was symbolic of completion—the Ten Virgins represented His church, His whole church.

Up until that Last Day, that Last Hour, as the Doctrine and Covenants warns, “there will be foolish virgins among the wise; [but] at that hour, cometh an entire separation of the righteous and the wicked.” (D&C 63:54)

As Elder Marvin J. Ashton taught: “[The foolish five] were not pagans, heathens, or gentiles, nor were they known as corrupt or lost, but rather they were informed people who had the saving, exalting gospel in their possession, but had not made it the center of their lives. They knew the way… They [had] been warned their entire lives …but were foolishly unprepared for the coming of the bridegroom.”

When the five unprepared bridesmaids returned to join the party, they found the door closed. They were too late.

In this parable, we see a cautionary tale to all disciples to look at our own lives and behaviors. No one can fill our vessels for us. Each must prepare their own stores of oil.

Though the fate of the five foolish virgins is tragic, the Savior used them to warn each of us not grow complacent in our wait for His coming. But instead, we should be like the Wise Five who had faithfully filled their vessels in preparation for the long wait.

In this parable, we can see the love the Savior has for each of us. His warning show that He cares about each individual’s salvation. The time of the Second Coming may be near or far, but either way, if we actively prepare by following the example and teachings of Jesus, we will be found ready when He arrives.

These insights come from the book The Parables of Jesus: Revealing the Plan of Salvation. The Parables of Jesus can be purchased at Latter-day Saint bookstores, or online at Amazon.com. Neither the authors, nor the artist are collecting royalties for this volume. Instead, they are being donated to four non-profit organizations, including Book of Mormon Central. The others are the BYU New Testament Commentary, BYU Studies, and Alliance of Covenant Artists (a coalition of Latter-day Saint artists).

Book Review: John and Jeannie Welch unlock the mysteries of the Parables of Jesus
May 10, 2019 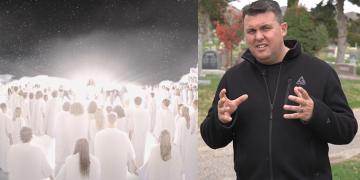