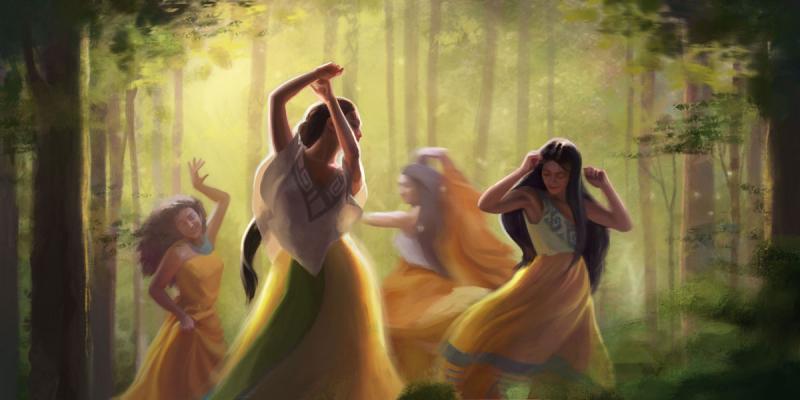 Mosiah 20 by Normandy Poulter and the BYU Virtual Scriptures Group.

This is an excerpt from this week’s installment of John W. Welch Notes, which can be studied on the ScripturePlus app, and in the Book of Mormon Central Archive.

Chapter 20 begins with the statement: “There was a place in Shemlon where the daughters of the Lamanites did gather themselves together to sing, and to dance.” Just as the month of February means Valentine’s Day to many Americans, the Fifteenth of Av had romantic significance to the ancient Israelites. On that day in the fifth month of the Israelite calendar (which fell originally on midsummer’s day), the maidens of Israel would gather to dance. This was, among other things, a “matrimonial holiday for youth.” This ancient holiday is described in The Biblical and Historical Background of the Jewish Holy Days by Abraham P. Bloch. Bloch concludes that this unnamed holiday was of very early origin, dating back to Moses. Following the conclusion of their summer chores in the fields, youth would turn their attention to “bride‐hunting,” and the dance of the maidens was “designed to meet that end.”

In particular, according to the Talmud, this day featured the dancing of the maidens of Jerusalem. As Rabbi Shimon ben Gamliel said: “There were no greater festivals for Israel than the Fifteeth of Av and Yom Kippur. On these days the daughters of Jerusalem would go out ... and dance in the vineyards. And what would they say? ‘Young man, raise your eyes and see which you select for yourself ...’” (Talmud, Taanit 26b). Knowing the meanings associated with this festival provides interesting contexts for several events in Mosiah 20–24:

In Jewish life, this was a great day of joy, celebrating the day when the last of the Israelites, who had come out of Egypt, finally died. Shortly after their Exodus, spies had been sent into Canaan, but the Israelites were neither prepared nor worthy and so God decreed that a generation would need to die out before their children could enter the land of promise (Numbers 13–14). The last member of that Exodus generation was said to have died on the fifteenth day in the month of Av.

Moreover, according to Jewish tradition, it was on that day that members of the various tribes of Israel were first allowed to fully intermarry among each other. In an important legal case toward the end of the book of Numbers, it had been generously held that daughters could inherit the tribal land of their father, so long as the father had no sons (Numbers 27), and a second case soon restrictively clarified that those daughters were allowed to marry only within their tribe. That second ruling was to prevent the inherited land from becoming owned by members of other tribes (Numbers 36). It was on a fifteenth day of Av that the establishment of this important property right for such daughters was remembered. It was a cause for great rejoicing and celebration.

In addition, in retaliation for the behavior in the incident involving the atrocious death of a concubine at Gibeah (Judges 19:20), the tribe of Benjamin ended up being attacked and their cities burned by the armies of the other tribes of Israel (Judges 20:48). In order to prevent the tribe of Benjamin from disappearing, the victorious Israelites captured 400 virgins from the city of Jabesh-gilead (Judges 21:12), and said to the remaining 600 Benjamites, “Go and lie in the vineyards; and see, and, behold if the daughters of Shiloh come out to dance in dances, then come ye out of the vineyards, and catch you every man his wife of the daughters of Shiloh, and go to the land of Benjamin” (Judges 21:20–21). That event was also said to have happened on the Fifteenth of Av.

And finally, it was on the Fifteenth of Av that Hoshea ben Elah, the last king of the northern kingdom, re-opened the roads to Jerusalem, removing roadblocks that had been set up by Jeroboam ben Nebat, to prevent people in the north from making the thrice-yearly pilgrimage to Jerusalem in the southern kingdom of Judah.

Thus, although not comparable in every respect, intriguing similarities exist between the meanings of the Fifteenth of Av and the case of the twenty-four Lamanite daughters and the twenty-four priests of Noah.

Yanki Tauber, “7 Joyous Events That Happened on the 15th of Av,” online at chabad.org. 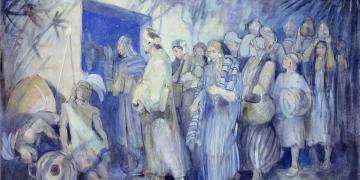 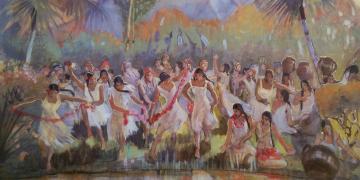 Why Did The Lamanites Break Their Treaty With King Limhi?
May 12, 2016